We reserve the right to amend or reinstate protocols deemed appropriate or recommended by the CDC or other relevant authorities.

Association Points to Failings in FAIR Ordinance, for Tenants and Housing Providers

Portland, OR – Multifamily NW announced today it is filing suit against the City of Portland, challenging two municipal ordinances under the Fair Access in Renting, or FAIR ordinance for short, for their violation of the Oregon State and United States constitutions. The FAIR ordinance consists of two ordinances drastically changing housing provider & tenant law in Portland. One changes the way housing providers post vacancy notices and how they process and evaluate applications; and one changes the way housing providers handle security deposits. The screening ordinance does not allow housing providers who use the “low barrier” screening process from denying applicants with poor criminal history, credit history or rental history. The second ordinance creates new rules so stringent it discourages the use of security deposits, instead leaving tenants and housing providers to resolve disputes through the court.

Renters will be the ones who ultimately suffer from these unreasonable reforms when the FAIR ordinance goes into effect March 1. Multifamily NW and its members support and believe in the importance of fair housing. Multifamily NW provides extensive educational opportunities to Portland’s housing providers on national Fair housing law. National Fair housing law makes it illegal to harass persons because of race, color, religion, sex, disability, familial status, or national origin. These reforms will turn what was already a fair process into a lengthy, vague process that hurts everyone.

“Without providing enough direction, the FAIR ordinance treats the serious processes of tenant screening and security deposits as a kind of choose-your-own adventure,” said Deborah Imse, executive director of Multifamily NW. “This is unacceptable, as rental housing and finding a home is not a game to Portlanders. Portlanders deserve laws that are well-thought-out, that give enough clarity for renters to understand their rights and enough direction for housing providers to be able to follow them.”

Founded in 1992, the Metro Multifamily Housing Association (MMHA) was created to represent residential property managers, owners, and vendors throughout Portland, Southern Washington, and down through the Willamette Valley to Medford. Our members manage over 200,000 units in these areas and represent every service related to the industry. In 2013, Metro Multifamily Housing Association became Multifamily NW to better reflect our diverse membership and affiliations. Learn more at www.multifamilynw.org. 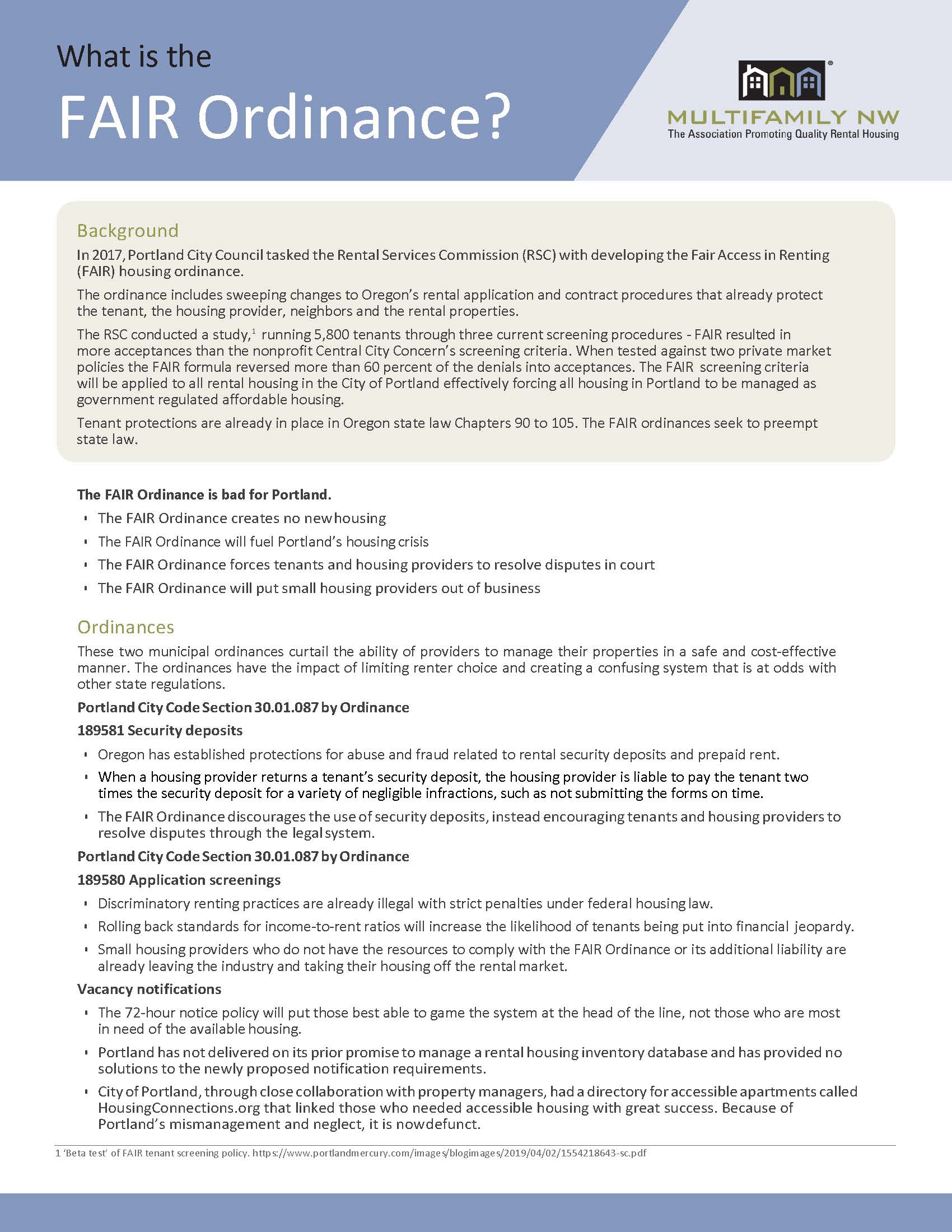