Changes to Eviction Moratoria in Oregon

In Oregon, HB 4213’s “Emergency Period” was set to expire on September 30, 2020. As anticipated, the rules in HB 4213 relating to Residential tenancies were changed last minute in Multnomah County by Ordinance 1287 and statewide by Governor Brown’s Executive Order 20-56 (“EO 20-56”). Both extend the protections in HB 4213 but vary in small but important ways.

This article addresses the new restrictions and how they vary between Multnomah County and the rest of Oregon.  You should familiarize yourself with these changes immediately and adjust any policies or procedures accordingly.  A review of HB 4213 is linked here as its requirements are still applicable despite being modified as described here.

The applicable changes are as follows:

The chart below provides a quick comparison of rules in Oregon and Multnomah County and the dates affecting certain actions. 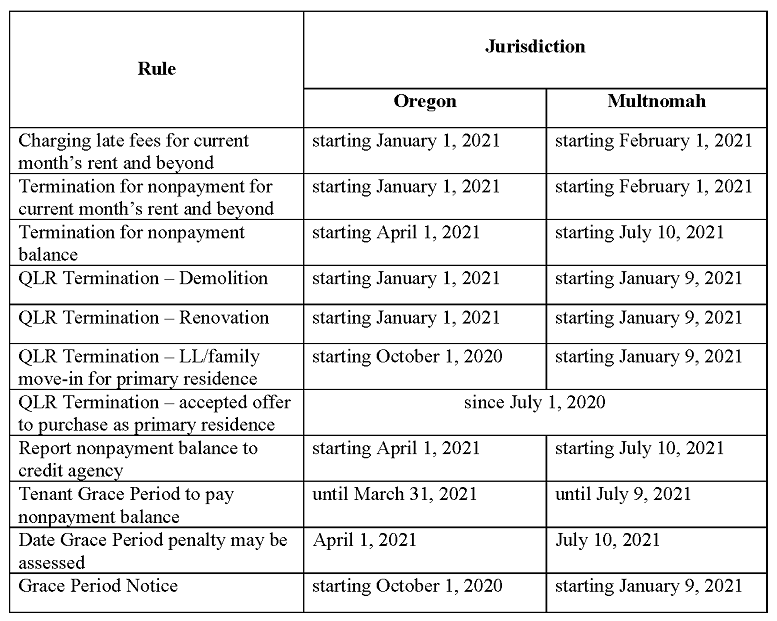 Multnomah County’s Ordinance has all the same protections listed above but varies slightly, defining “nonpayment” to apply to missed payments between October 1, 2020 and January 8, 2021, effectively extending the protections above by eight (8) days.

In addition, the Multnomah County protections apply to taking action related to the “nonpayment balance”, which is more inclusive than HB 4213 and EO 20-56 as it defines nonpayment to include:

“all or a part of the net total amount of all items of nonpayment by a tenant, and all unpaid amounts that accrued by operation of ORS 90.220(9) during the six-month Grace Period described in subsection (G) of this section, provided that the tenant makes payment in an amount equal to or greater than the rent for the current rental period.”

The underlined provision above was added to HB 4213’s definition and its implications are not entirely clear. If a Tenant fails to pay rent in February 2021 or beyond, a termination for nonpayment may be issued. However, if a Tenant pays at least the amount of the current month’s rent, the ability to terminate for any other amounts may be impacted. We recommend that you seek legal counsel in such circumstances before issuing any nonpayment notices, pushing an eviction case forward, or threatening to either of the two.

In addition, unlike EO 20-56, Multnomah County’s definition of “termination without stated cause” retained the prohibition on issuing a qualifying landlord-reason for intent of Landlord or Landlord’s immediate family to use the rental as a primary residence. Consequently, that option is not available until January 9, 2021 at the earliest.

For Oregon, the Emergency Period balance reminder notice must also include a statement that eviction for nonpayment is not allowed before December 31, 2020.

In Multnomah County, the Emergency Period balance reminder notice must also include a statement that eviction for nonpayment is not allowed before the end of the Emergency Period which is defined as the period from October 1, 2020 to January 8, 2021, or the first day the emergency declared in Multnomah County Executive Rule 388 and its addendum, as extended by the County Board, is no longer in effect, whichever is later.

Grace Period notices under HB 4213, if given, allow housing providers to assess a half month’s rent penalty after the Grace Period if the Tenant fails to timely pay in full or notify the Landlord that they intend to use the Grace Period. Again, Governor Brown’s EO 20-56 made a minor modification to this while Multnomah County’s took a very different approach.

Although the serving of Grace Period notice as set forth in HB 4213 is not strictly prohibited in the Multnomah County Ordinance, these notices must be carefully drafted so as to take into account the specific Ordinance requirements.  As such, use of forms approved by an attorney is strongly advised.

Please be advised that the language in the Multnomah County Ordinance is in places vague, and subject to interpretation.  Multnomah County Landlords wishing to send notices to their Residents about balances due from April 1, 2020 onward at any time before January 9, 2021 should consult with counsel about all risks prior to proceeding.

This letter is not intended as legal advice. Please obtain advice of an attorney for any policy change or decisions regarding Residential and commercial Landlord-Tenant matters, as well as laws that impact your local jurisdictions.