Seattle is known for its hip neighborhoods, soaring home prices, and being home to Amazon.com Inc., the world’s most valuable company. So why is its rental housing market experiencing the most severe slowdown in the U.S.?

Seattle-area median rents didn’t budge in July, after a 5 percent annual increase a year earlier and 10 percent the year before, according to Zillow data on apartments, houses and condos. While that’s the biggest decline among the top 50 largest metropolitan areas, it’s part of a national trend. Rents in Nashville and Portland, Oregon, have actually started falling. In the U.S., rents were up just 0.5 percent in July, the smallest gain for any month since 2012.

“This is something that we first started to see two years ago in New York and D.C.,” Aaron Terrazas, a senior economist at Zillow, said in a phone interview. “A year ago, it was San Francisco and most recently, Seattle and Portland. It’s spreading through what once were the fastest growing rental markets.”

Tenants are gaining the upper hand in urban centers across the U.S. as new amenity-rich apartment buildings, constructed in response to big rent gains in previous years, are forced to fight for customers. Rents are softening most on the high end and within city limits, Terrazas said. Landlords also have been losing customers to homeownership as millennials strike out on their own, often moving to more affordable suburbs. 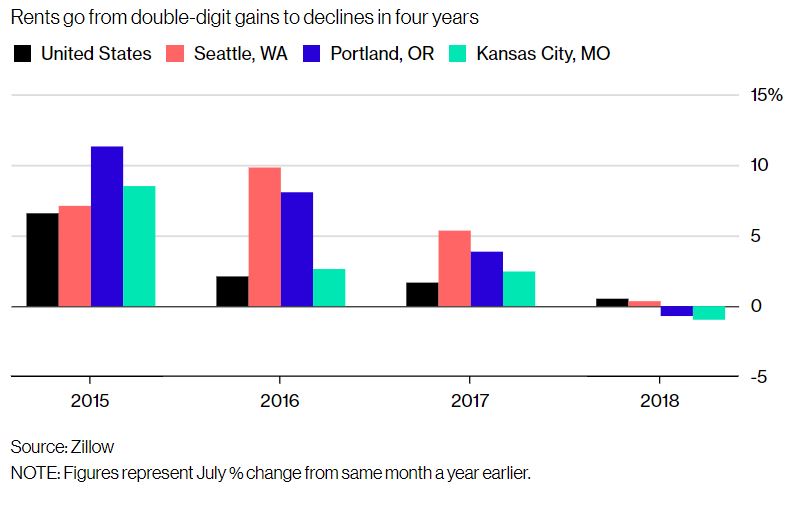 Realtor Roy Powell last month was helping his clients, two women in their mid-20s find an apartment in Seattle. They looked at seven places and narrowed it down to two -- a five-story building with a rooftop dog park and an air-conditioned gym, and a newly remodeled seven-story tower that won their business by throwing in a year of free underground parking, normally $175 a month.

Even condo owners with just one or two units to rent are offering concessions to compete with new buildings, Powell said. “A lot of them are going from absolutely no pets to allowing pets. That’s a big deal in Seattle, where everybody has a dog or cat.”

Batik, a new 195-unit Seattle apartment building, has views of the downtown skyline and Mount Rainier, a giant rooftop deck with a garden where tenants can grow fruits and vegetables, a community barbecue and an off-leash pet area. New tenants can receive Visa gift cards worth as much as $6,000, with half paid at signing and the rest a month later.

“There is tremendous competition for tenants,” said Lori Mason Curran, spokeswoman for landlord Vulcan Real Estate, Microsoft co-founder Paul Allen’s company, which launched Batik in March. “Over time, we think long-term demand is solid. But there is so much supply tamping down rent growth right now.”

In Seattle, another factor contributed to the glut of rentals. While the city is in the midst of a building boom -- with more cranes dotting the skyline than any other in the U.S. -- much of the residential multifamily construction has been apartments. Developers have shied away from condos because of state laws that allow buyers to more easily sue if there are defects in the construction.

U.S. multifamily apartment construction for the past few years have been at levels not seen since the 1980s and rapid rent gains have also encouraged owners of single-family homes and condos to fill them with tenants. Projects opening now were conceived by developers a few years ago when rent gains in the U.S. were peaking at an annual gain of 6.6 percent, according to Zillow data.

The most expensive markets slowed first as new supply became available and tenants struggled to afford rapidly-rising lease rates. Rents in the San Francisco area jumped 19 percent in the year through July 2015. Now, they have been flat since last July. New York rents, which were up 7 percent in 2015, have been decelerating for a couple years, declining 0.4 percent in July. 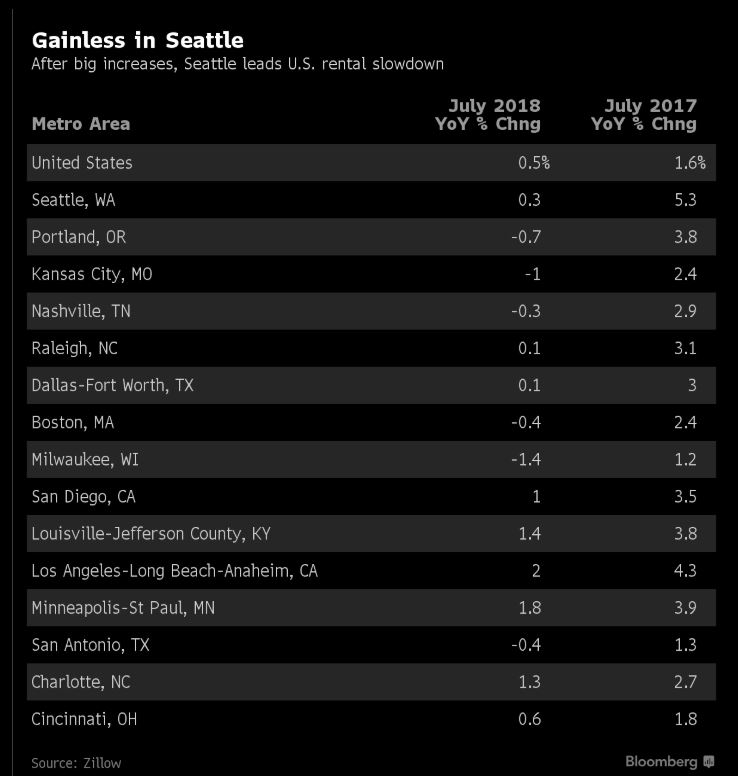 For the first time since 2010, it’s now easier to build wealth over an eight-year period by renting a home and investing in stocks and bonds, rather than by buying and accumulating equity, according to a national rent-versus-buy index of 23 cities produced by Florida Atlantic University and Florida International University faculty. That’s because home prices are high and rising mortgage rates are adding to the cost of homeownership.

That could be bad for sellers, especially in markets like Dallas and Denver, where renting is now so much more favorable than buying, according to Ken Johnson, a real estate economist at Florida Atlantic University, a co-creator of the Beracha, Hardin & Johnson Buy vs. Rent Index.

Reminiscent of the Bubble

Already, housing markets in strong economies are cooling, in part because incomes haven’t kept pace with rising prices and borrowing costs. Dallas and Denver have reached so far into favorable rental territory that they look like Miami right before it crashed in the last decade, Johnson said.

The difference now is that neither market is experiencing the kind of speculation and risky lending that inflated the last housing bubble, he said.

"What’s interesting is that cities that suffered the least in 2007 and 2008 -- Dallas and Denver -- now are experiencing the most exposure to risk," Johnson said.

The slowdown in the rental market coincides with a rise in homeownership among millennials, which jumped to 36.5 percent in the second quarter from 35.3 percent a year earlier.

"It’s both supply and demand," Terrazas said. "There has been a lot of construction and investment in rental. But there is also softer demand."

— With assistance by Noah Buhayar, and Robert Jameson